The Taboo Pleasures Of Fright

My mother hates Horror films. If she catches anybody watching a scary movie, even if she's in a different room, she gets angry to the point of picking fights. It's impossible.
Growing up, she discouraged us from all things frightening by telling us we couldn't watch them because we’d have terrible nightmares. As a result, they became tempting objects of excitement, secret, taboo enjoyments that made me go to bed with all the lights on. If she caught me, I got zero sympathy, and she guaranteed that I’d be sorry when I had bad dreams as a result.

I spent many afternoons from the mid 1970’s through the 1980’s, especially slow weekends, searching the tv for any scary movie or tv show I could find. I found Hammer Horror, classic horror, campy horror, great horror, bad horror, as well as reruns of Twilight Zone, Outer Limits and Dark Shadows. These creeps, bogey men, vampires, demons, ghosts, and other creatures distracted me, provided welcome escape from some of the more real life horrors in my childhood.

I saw many Vincent Price films, and lots of Christopher Lee, as well as various Roger Corman helmed AIP movies, but until I happened upon it at my local library, I never saw Edgar Allen Poe’s The Oblong Box.

Let's Start With A Poe Title

Basically AIP had made a series of Poe adaptations, but not of that story, and they had this script, called Man In A Hood by Lawrence Huntington, so they stuck the title of the Poe story onto the script and voila, marketed it as part of their Vincent Price starring Poe series. The screenplay was actually inspired by Rudyard Kipling’s Mark Of The Beast. 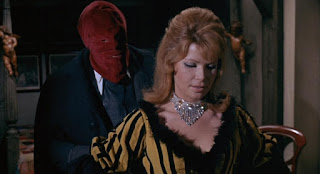 Normally when a studio pulls something like this, it's not good. Usually the script is a stinker. Plus AIP was not a company that really cared necessarily about high quality output, although lots of writers and directors who worked for them were arguably great filmmakers, producing original and interesting films, probably made more original and imaginative by constraints such as very low budgets and very short shooting calendars.
The opening of The Oblong Box begins with a scene that could have been exploitative and extremely racist given the time the film was made. Instead it depicts an authentic voodoo ritual, filmed in observational documentary style.

Later we see the African man, who had been the voodoo priest, speaking as articulately as the white characters, and dressed in a Victorian suit. His depiction so atypically non-racist for the period that The Oblong Box was banned in Texas for being “pro negro.”
In fact, the entire film isn't your typical campy late 1960’s horror film at all. It has depth. When I started it, I quickly realized I wasn't going to be able to laugh my way through it, enjoying an it's so bad, it's good and/or funny experience, but that I’d need to pay attention.

We owe the depth of the film and amazing production values to the collaboration between director Gordon Hessler, A Hitchcock protogé, and screenwriter Christopher Wicking [look up spelling]. It's Wicking who rewrote Huntington’s script to have themes to do with authority and white privilege as the cause of the curse in the film. 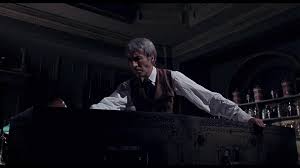 Don't get me wrong. Vincent Price still can get 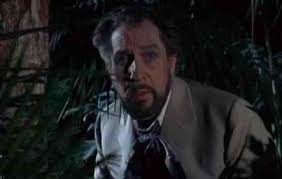 a bit hammy and too over the top, and sometimes seems miscast here because of it, and frankly Christopher Lee’s part is actually very supporting and minor. Therefore he's not on screen nearly enough. It's not a Hammer film after all, and at the time he wasn't really a known actor in the United States. But I still think it was an interesting choice to have Price not play a made scientist. The Oblong Box is also the film where Vincent Price and Christopher Lee met for the first time.

Contemporary audiences might find the special f/x dated. Even the blood is very fake looking. It's a very bright orange-red. There's no graphic violence and gore like today’s horror, even low budget and television horror. Plus the tone is more Gothic than shock and fright. It's a pretty cerebral and literary film for a Poe adaptation that's really loosely inspired by Kipling.

I definitely can recommend this film. Is it a great film though? No way, but if you're a classic B grade horror fan like me, then it's definitely one you need to see.

Plus be sure to watch it a second time with commentary by film historian Steve Haberman. Most of my facts for this review comes from information I learned there. He gives the film high praise and compares it to “Jacobean revenge tragedy.” Sounds like the perfect respite from election tension, and the perfect revenge fantasy for those of us who didn’t vote for the wealthy white guy who won.