The Addiction Abuse Connection: Part One A Shattered Childhood

Trigger Warning: abuse, including sexual abuse. Also sex and sexual assault. (I don't believe in trigger warnings, but include them because I don't want to deal with getting into discussions about how an essay I wrote triggered you).

Me age 10.
When I was about 9 or 10 my mother's 2nd husband molested me for the first time.
I don't actually remember if they were married yet. We had all recently moved from the Tri-Cities of Washington state to Oakland, CA after he, a scientist, had gotten a job at a lab in Berkeley. They married a few months after we moved. 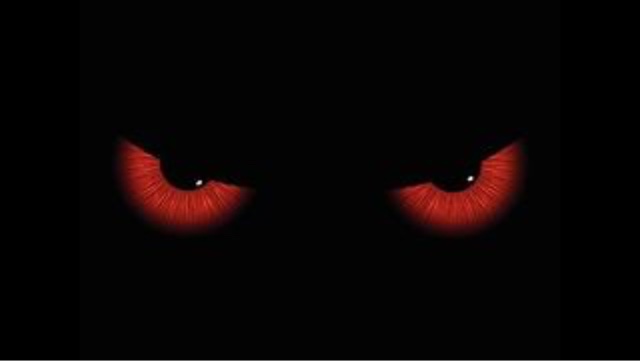 Image: http://cdn.grid.fotosearch.com/CSP/CSP220/k2209719.jpg
There was something about him that gave me the creeps from the moment I met him but I desperately wanted a father figure and male approval, so I worked hard to push away the intuition that this guy was dangerous in spite of the fact that he terrified me. 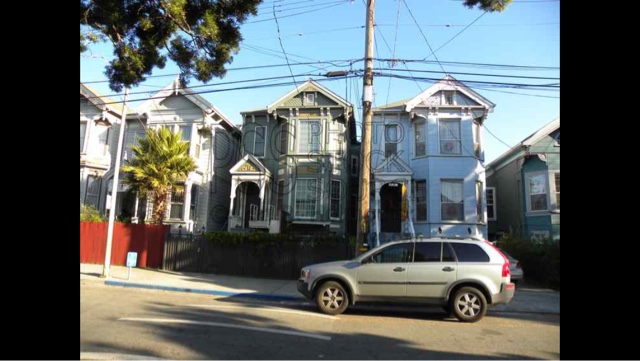 Image: (not the actual house) http://www.photostocksource.com/images/california-cities-misc/160190007-victorian-houses-lg.jpg
He and my mother were remodeling the Victorian house we lived in. One day he and I were home alone. I don't remember where my mother & brother were. I had come into the kitchen in search of a snack. He was there. I don't recall how, but somehow instead of a normal hug, he got me so I was standing with my back to him. He started touching my body everywhere, commenting on how developed it was getting. At the time I had zero knowledge or understanding of sex, or how men came on to women but something about his behavior and tone of voice made me feel ill. I somehow squirmed out of his embrace and quickly left the room. 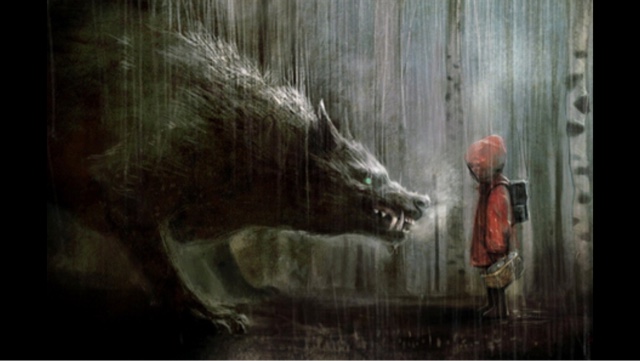 Image: https://dncache-mauganscorp.netdna-ssl.com/thumbseg/950/950388-bigthumbnail.jpg
Because he had fondled me and not raped me or removed any clothes, at the time I didn't even know I'd been molested. I just knew it felt wrong. I didn't tell anybody because I didn't think any adult would take it seriously since in my mind nothing sexual had happened and I just had a bad feeling about how he was acting, talking and touching me. Plus nothing that happened matched any of the after school specials or movies of the week on sexual abuse which were then in vogue on television. In those the girl was always raped by a family member, or neighbor. Usually violence or a long grooming period was involved, coupled with threats of harm if the girl told anyone.
My ex-stepfather didn't do any of that. He just acted without talking about it. It was as if what he was doing was perfectly natural and normal. Maybe in his warped mind it was.
After that I avoided him as much as I could for several months. This hurt his feelings. He would get upset with me for not hugging him anymore unless my mother reminded me to. Eventually I minimized the incident and my need for fatherly affection and attention took over. I started feeling bad for not being nice to him. Me age 9
Because he was a scientist, we had a computer and modem at home before most people did so he could connect to the computers at the lab from home. I guess you could say we had the Internet before it was the internet. Besides the projects the lab worked on, there were a couple early, text based computer games on the lab computers. There was one that was a fantasy quest game with wizards, dwarves and elves that I loved to play. Of course to play it, my ex-stepfather had to log us onto the lab's computers via our desktop. 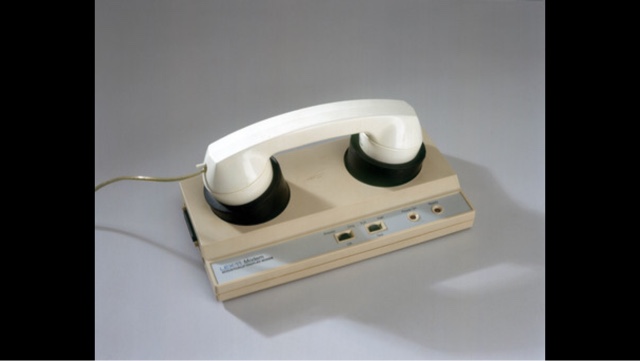 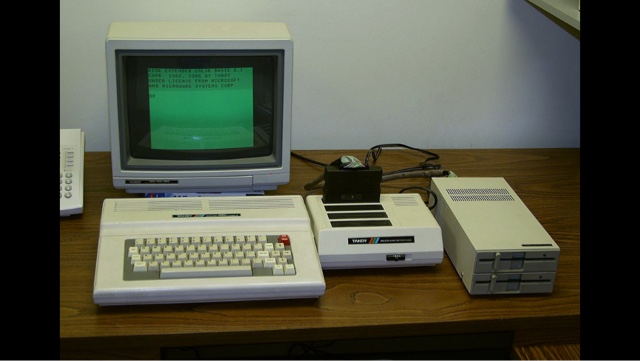 Image: https://upload.wikimedia.org/wikipedia/commons/9/9e/CoCo3system.jpg
He used this game to molest me again. I had come into the den where the computer was working because I wanted to ask to play the game. He must have told me yes and I must have forgotten enough of our creepy encounter to trust him because he got me to sit on his lap. It never occurred to me in my innocent, child mind that I was being manipulated again into something sexual. While I typed my commands for the games, he started stroking my waist & tummy. Then he moved his hands to try fondling my genitals. I immediately got up and said I needed the bathroom.
From that day, I never went near him. I tried telling myself I imagined what happened, or that he maybe he'd accidentally touched me where he shouldn't have, but could never convince myself of that. Over the years he became increasingly hurt that I wouldn't hug him or speak much to him. 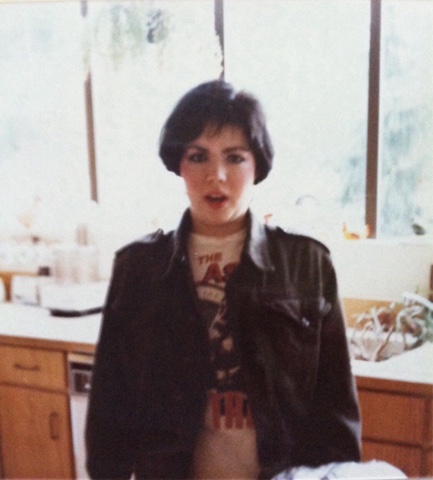 Me age 16/17
I again didn't tell any adults. Even when I was in therapy at 16, I didn't tell. I told my therapist about his alcohol use, his verbal and emotional abuse, but never about that. I slept with scissors under my pillow in case he decided to rape me. I fantasized about poisoning him with Anise in cookies I would bake since he was very allergic to it. There were no epipens in those days. His throat would have closed immediately and that would be it.
Fondling is a really evil abuse. If that's the method of abuse and control used against you, it's so easy to minimize and deny. For years into my 30's, I felt shame and guilt for not being able to get over it. I continued to wonder if I'd imagined it or if I was making a big deal out of nothing. I had friends who'd been beaten and raped repeatedly by a family member or members. What happened to me was nothing compared to that, right?
But sexual trauma is sexual trauma no matter what form the sexual abuse took. The effect is the same. The shame is there. The secret and the pain get stored in the body and the mind. The fear is real. How a person's sexuality develops into adulthood is altered, becomes unhealthy.
I know it subconsciously influenced my in interpretation of male behavior and played a part in the types of situations I've been involved in as an adult, including my own sex addiction.
To be continued in Part Two next month.
Here are some resources on Childhood Sexual Buse if you or anyone you know needs help:
RAINN, national resources for sexual assault survivors and their loved ones.
https://www.rainn.org/national-resources-sexual-assault-survivors-and-their-loved-ones
Darkness to Light, national resources related to childhood sexual abuse.
http://www.d2l.org/site/c.4dICIJOkGcISE/b.6069289/k.E356/National_Resources_Related_to_Child_Sexual_Abuse.htm
National Child Traumatic Stress Network.
http://www.nctsn.org/
There are lots of resources. Note although this article is written from the point of view of a woman about her experience with sexual abuse as a girl, childhood sexual abuse of boys is equally as common as abuse of girls.
Editor's Note: This week's article was originally scheduled to be the premier article in Crazed!'s new monthly interview series, as well as the introduction of the monthly schedule of weekly posts. However in light of recent current events, I've decided to introduce my editorial column instead. This week's column is the first in a multiple part series on childhood sexual trauma and sexual addiction. My interview with Jimmy O of JoBlo will appear next week instead.
Email Post
Labels: addiction childhood trauma sex Sexual Abuse