Chameleons and Stardust: How David Bowie changed and influenced my life 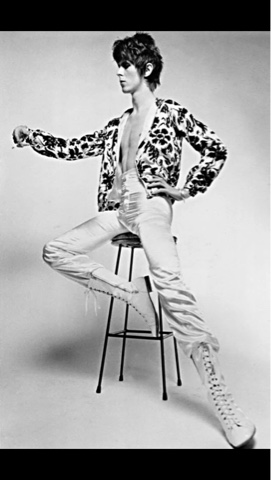 In the middle of the night, or really very early morning hours of Jan 10, 2016, I couldn't sleep, so I was studying up on life as a Foreign Service Officer. The prospect of changing careers again and reinventing myself for the I don't know number of time was probably what had me wide awake, reading when the notification came through on my phone that David Bowie, my idol since I was 9 years old had passed away from cancer at the age of 69. It felt unreal. How could it be true? I hadn't seen any reports that he'd been ill in the media. Maybe it wasn't true. But it was, it is true of course.

It's taken me almost a month to be able to put my emotions into words about Mr Bowie and his passing, but more importantly his influence on not just my own art and writing, but on my very sense of self as a person, and the infinite possibilities of being and presentation that a person has within them, the idea that we aren't ever stuck in one single persona, and that we and not others are in control of our personality, our being, our attitude, and not other people. For the past 6 or more years, I had forgotten those lessons. It took his surprise death to shake this idea, this confidence in myself, and my ability to be the person I want to be is based on my own creation and not on what others believe or say about me, particularly directly to me when that very persona does.not allow them to easily control or abuse me. But it also reinforced my drive and ambition to change tracks pro-life from being a therapist and artist with a self fulfilling and supported by others that I am incapable of anything better, that I'm stuck where I am struggling for crumbs, helping others, while living in poverty myself to becoming a very different kind of public servant, a diplomat, and possibly a future politician devoted to helping others get out from under abuse and tyranny while serving my country and combating violent extremism.

Maybe it sounds strange to some that a musician, an artist like David Bowie could not just profoundly influence somebody to become a musician who is true to themself and ever evolving, but that such an artistic and seemingly eccentric I individual could also influence a person in other areas of their life, including entering political life through foreign service. However, it shouldn't be. David Bowie was the ultimate chameleon with an infinite capacity for self reinvention that went beyond art and music, but into business, and more importantly public persona and presentation. To a girl growing up often feeling like she was born in the wrong time, in the wrong universe even, while suffering bullying and abuse, the discovery a person who could constantly evolve, and who made being an individual, being different cool, it was a revelation, and a revolution, albeit a slow one.

I first discovered Bowie at about age 9. My parents were divorced and my mom was engaged to a man I instinctively disliked. To be blunt, he made my skin crawl from the moment I met him. We were on the verge of moving from eastern Washington state to Oakland, CA, visiting my grandmother in Spokane, WA, when a lines from a song from a couple years earlier started repeating in my head -- "Fame" was the song. My mom is a music lover so we always had music playing in the house and in the car. In fact I already had strong, eclectic musical tastes on my own, usually related to musical theatre and disco. Obviously I'd heard David Bowie's "Fame," when it had originally played on the radio, but it hadn't made an impression yet. The song became an obsession and as soon as we got back home I made it a mission to figure out who sang it and if I could get a 45 single of it.

During this time we did move to California, and I did somehow discover via the radio that David Bowie sang the song I was stuck on. But since the song wasn't recent, I couldn't find a single on 45 of it easily. Instead I ventured into Tower Records and found a large number of albums by David Bowie. I discovered "Fame" on Bowie's Changes One album, and bought it with my allowance money. That purchase began a collection of every Bowie album I could get my hands on, and of every article music magazines, usually British until after the days of "Modern Love," and "Blue Jean" in the mid 1980's. I became a Bowie expert by age 12 which always impressed adults. I did not seem like the typical Bowie fan as a timid barely adolescent girl who was too shy to speak audibly, and who was also obsessed with Shakespeare, Dickens, King Arthur, and ballet. But that persona would change, at least outwardly within a few years.

By the mid 80's my musical tastes had continued to evolve through my interest in Bowie. By buying albums by him full of songs I had never heard on the radio, I bran he'd out to discover Bowie collaborators like Iggy Pop. I also learned about punk and started listening to the Clash and the Sex Pistols, then the Pretenders. My exposure to Bowie led me to not judge anybody for their original appearance, such as when Boy George and The Culture Club appeared in the U.S. when New Wave hit. More importantly though, David Bowie had allowed me to change my own persona from nerdy awkward girl in oversized eye glasses to cool, sarcastic, spiky haired punk who was mysterious, mostly silent and who didn't give a fuck what people thought of her.

Like many others, David Bowie and his ever changing personae, allowed me the power to invent myself as well. It allowed me to pursue music and acting. It allowed me to later change my mind slightly and instead become a writer and filmmaker, including working on some interesting projects, especially a documentary on Surrealism by Karl Krogstad. Then even later, Bowie's evolutions of personality and reinvention, undoubtedly gave me the courage to go to London as an au pair, and to stay in London to become a tutor/therapist to a child on the autism spectrum, a decision that shaped my life over the last 17 years and ultimately led me to a discovery of my own autism via an unofficial diagnosis of Aspergers Syndrome.

Over the past year and a half, I've struggled through some odd health issues, some that have been with me all of my life, but peaked over the last year, partly due to my age, partly due to ongoing severe stress related to huge economic losses and struggle during the Great Recession, including income cuts from $35/hour to $9/hour. My income recovered a little to $14/hour and briefly I was doing ok financially and looking like I might recover. Then a series of health issues, my own negative beliefs about having Aspergers, plus the beliefs of others, led me to being unable to work full-time and my hours shrunk to roughly 12 hours a week. I had to apply for food stamps, Medicaid and even filed for disability. Then doctors discovered that I had gallbladder disease and I had surgery to remove my gall bladder. After nearly dying from complications related to anesthesia, I started to really re-evaluate my life. I felt better. I canceled my disability claim. I started seeing that there were two ways to see myself. One way was an incapable Annette, a loser, a failure, and who's autism was what had held her back all her life. The other Annette though is a survivor, constantly striving, and forever reinventing herself. She is a strong woman capable of anything. I don't think I could have made this leap without David Bowie. Without his influence on my life and my sense of self, of my own infinite capacity, I would never have dared to even look for new strength and a new career. I would have been trapped.

Perhaps my tribute to Mr Bowie is both too analytical, and too self focused. I'm both an intensely logical and intensely emotional person, but in crisis especially, I am rational, logical, and analytical. Perhaps this is a strength. Perhaps it isn't. But I hope, I think that David Bowie would rather his influence live on and that those of us left behind continue to remember that we are never trapped. We all can, always, be in control of who we are and of who we become and appear to be. Thank you Mr Bowie, wherever you may be.
Email Post
Labels: David Bowie